Nativity scenes in Umbria represent an important Christian tradition. In fact, not everyone knows that the first nativity scene, made in Greccio in 1223 (near Rieti), was the work of Saint Francis of Assisi. Hence why during the holiday season, in the historical centers of our region as well as in the small villages, you can admire nativity scenes that are true artworks, rich in history and artisan traditions. 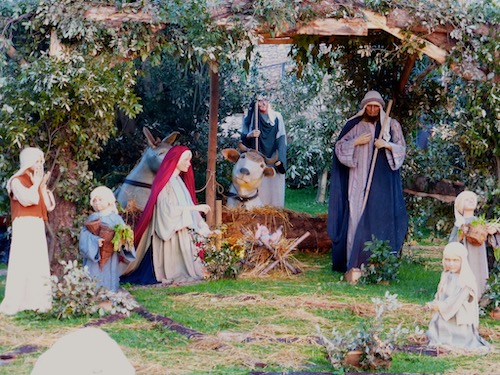 Among the several cribs that are staged in Umbria, in this guide we propose the most suggestive ones, which are worth a visit if you’ll have the chance to spend the Christmas holidays in the Green Heart of Italy.

In Orvieto, the city of the Rupe di Tufo, the Pozzo della Cava houses the “Presepe nel Pozzo” (Nativity Scene in the Well) at a depth of no less than 14 meters. The setting is different every year and is created by theatrical set designers, famous for their special effects.

Heading north from Orvieto, Massa Martana hosts the ‘Presepi d’Italia‘ event every year, with around 150 nativity scenes displayed in 25 workshops within the medieval walls. One of the most magnificent is undoubtedly the Ice Crib, set up over an area of 15 square meters and consisting of magnificent statues sculpted on ice blocks that look like crystals.

The third crib we propose was born only a few years ago from the will and commitment of the inhabitants and is the Living Crib of Marmore in the province of Terni, set up in the incredible and natural setting of the Marmore Falls.

In Ferentillo, in the lower Valnerina valley, there is a nativity scene that won the national ‘Presepium Italie’ competition in 2003, where the characters are carefully detailed and the set design is enriched by details such as light effects, smoke, and characters movements.

Finally, we recommend you go to Cascia, in the town of Santa Rita, where you will find the annual Rassegna dei Presepi, an exhibition of scenes of various types and sizes in churches, cellars, and hidden places.

Where to find updated information

To find out all visiting times and locations, you can consult the website of Umbria Eventi.