Foligno is often overlooked by visitors to Umbria, despite there being many interesting events, often food and drink related (to name a few, I Primi d’Italia, Miele in Umbria, Festa della Birra Artigianale). Yet, it is a lovely town with beautiful square, a few nice churches and it is not built against or on top of a hill, so very comfortable walking here and many people on bicycles (love this …probably due to my Dutch roots). Also … Foligno has Palazzo Trinci.

A guided tour by Guide in Umbria

I can now say this is a gem not to be missed, but in the 10 years I have been living in Umbria … I had no clue of the beauty hidden behind the rather bland facade of this palazzo.

Last Saturday the Guide in Umbria had organized a guided tour of Palazzo Trinci (and two churches) and once again, this is their third guided tour I participated in this year, I feel enriched and very stupid at the same time. Enriched because of all the new information and insight gained. Very stupid because apparently I do not know a thing about Umbria. Actually, I can add EXTRA stupid because I do work in  tourism and therefore should know a lot more.

Back to Palazzo Trinci … the facade does not invite anybody to explore further, but please do when you are in Foligno. This palazzo was built from and on top of a few existing buildings around 1400 and is, internally, totally covered with frescoes. Apart from the amazing architecture resulting from the joining of various existing structures, the frescoes are incredible. Most are non biblical which is very rare to find. Only the chapel is the logical exception, all other rooms have other stories depicted on the walls. You can find the story of the founding of Rome in the Loggia and there is one room with the 7 liberal arts and the planets. Also the various stages in the development of a person are depicted. There is a complex relationship between the planets and the ages of man and the hours of the day … but I did not really get the clue.

My pictures do not at all give the right impression, but I hope they do make you curious enough to visit! 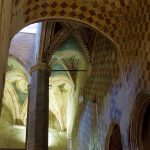 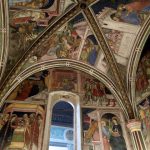 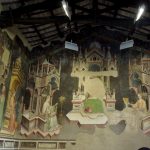 2 responses to “Palazzo Trinci in Foligno”