Sagra and wine tasting in Montepulciano

Sagra and wine tasting in Montepulciano

Last weekend we organized a spontaneous wine tasting for a group of Belgian guests. Five families and friends who were in Italy for the first time. Every year they go on holiday together and this time they decided to come to Umbria to Montone Rental. They contacted us for information about sagra’s or a winetasting.

A sagra is a typical Italian event, which is very popular by locals. The only way to find out about sagra’s is to watch out for pamphlets or posters in the area you’re in. Typical local food is prepared by locals for locals, combined with lots of wine and some music to cheer up the evening. We wrote a blog about sagra’s last year.

In Montallese, a small village in Tuscany close to Chiusi and not far away from the Trasimeno Lake, was the “Sagra della Nana”. Nana is dialect for duck. A friend of mine, Gianfranco, is a cook and prepares the most delicious “duck” dishes of Tuscany. I already had the intention to go to the sagra and I invited our Belgian guests to let them experience this typical Italian evening.
Before the sagra I organized a wine tasting at the Gattavecchi wine cellar in Montepulciano, one of these beautiful hill top towns in Tuscany at a stone’s throw from Lake Trasimeno in Umbria. Montepulciano is well known for its Vino Nobile di Montepulciano. This wine is made from 100% Sangiovese (Prugnolo Gentile) grape and is also called the king of wines. In 1980 it was awarded the DOCG classification.

The family Gattavecchi has been in the wine business in Montepulciano for 4 generations. During the Second World War grandfather Vincenzo was forced to stop his wine activity because of bombings. But after the war the family Gattavecchi rebuilt the business and ever since then the wine they produce is a worldwide appreciated Vino Nobile di Montepulciano. The vineyards from the Gattavecchi family are situated in the southern part of Montepulciano: Argiano, Le Caggiole, Ascianello and Poggio alla Sala. Poggio alla Sala is an area where the Etruscans used to live, and where archeological artifacts have been found.

The wines are stored in the wine cellar Simoneschi Baroncelli in Montepulciano. This wine cellar has been bought in 1958 by the family Gattavecchi and once belonged to the 14th century monastery of the Padri Serviti. The wine matures in wooden barrels in deep wine cellars dug into tuff stone. Immediately next to the old monastery there is the church of Santa Maria dei Servi. 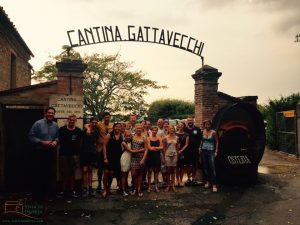 We got a guided tour by Luca Gattavecchi. Luca is the owner and winemaker. He perfectly explained the history of the Gattavecchi family and told us about the wine production of the Vino Nobile di Montepulciano. He showed us the deep wine cellars where the wine ages in big wooden barrels. 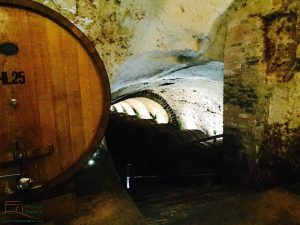 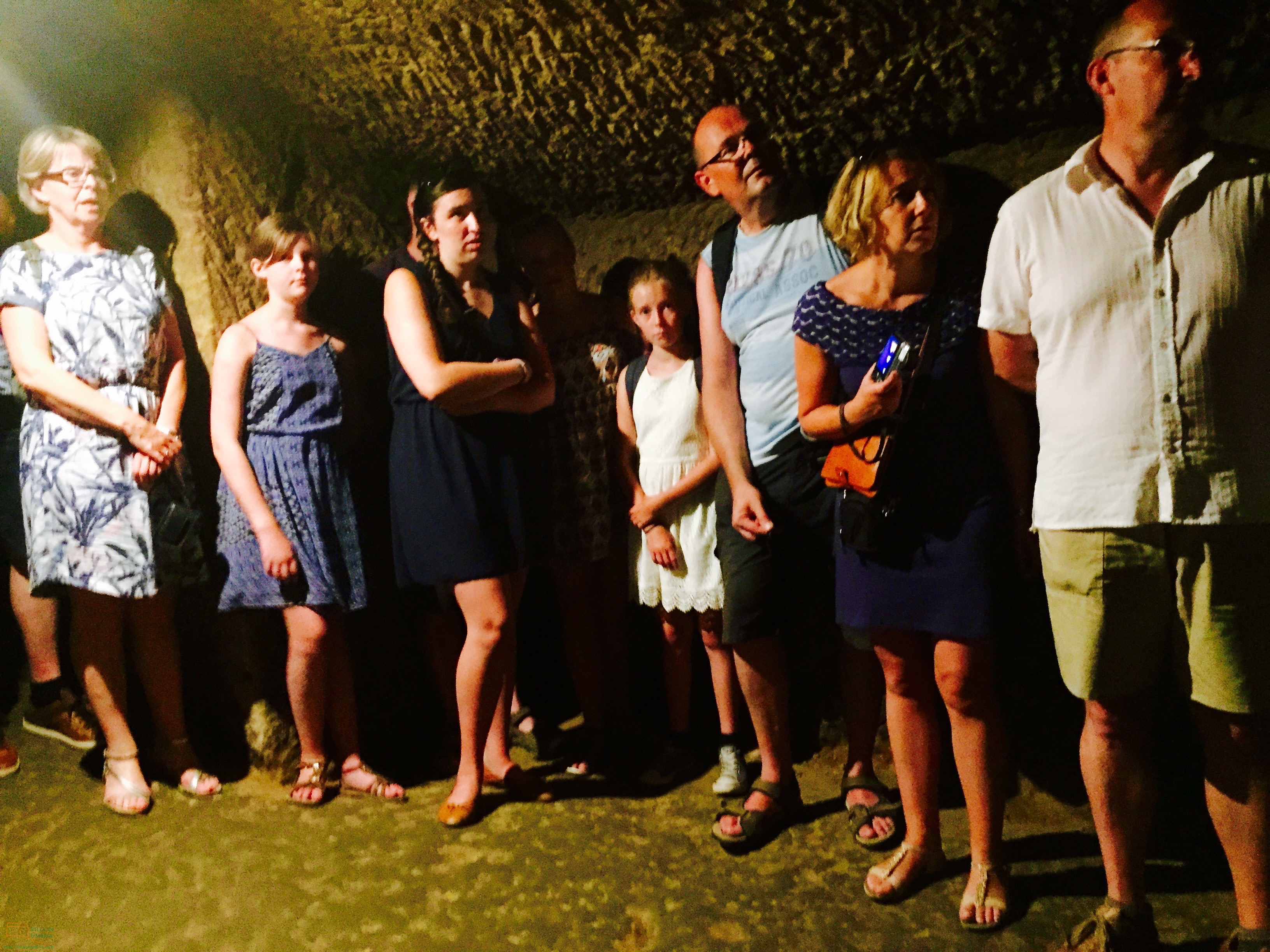 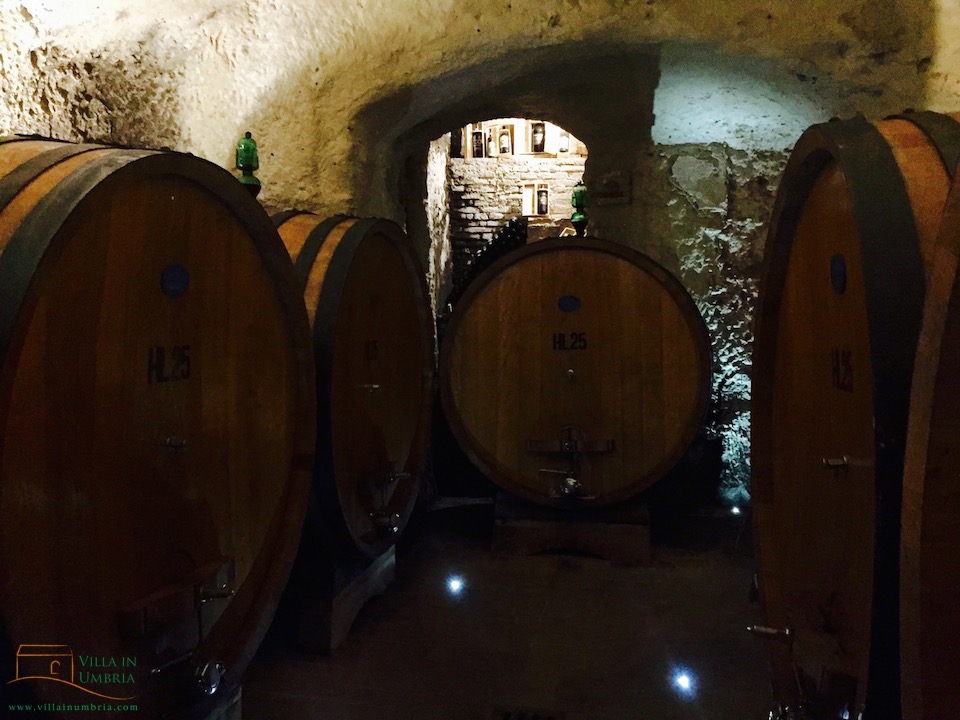 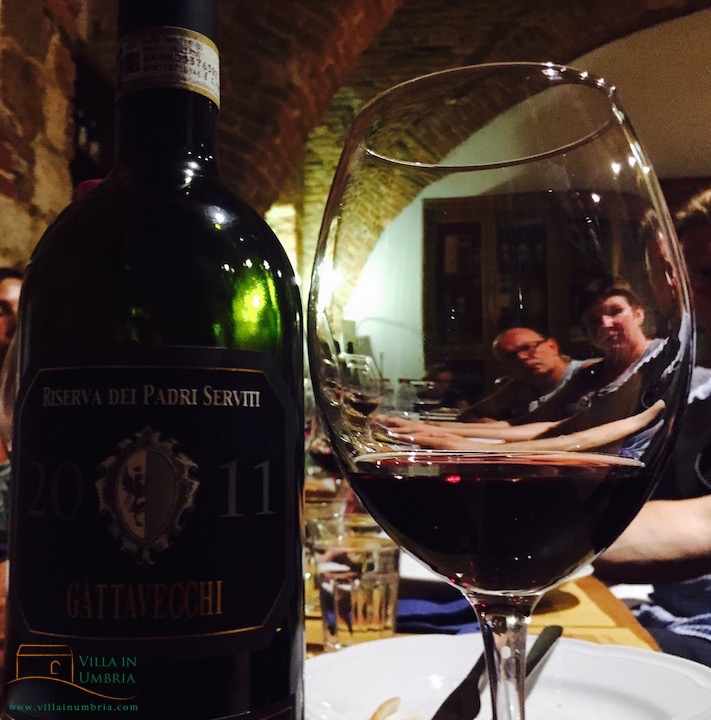 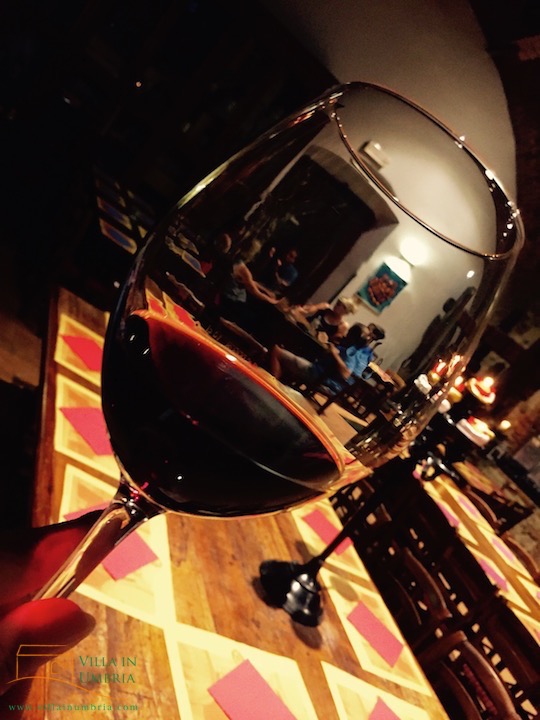 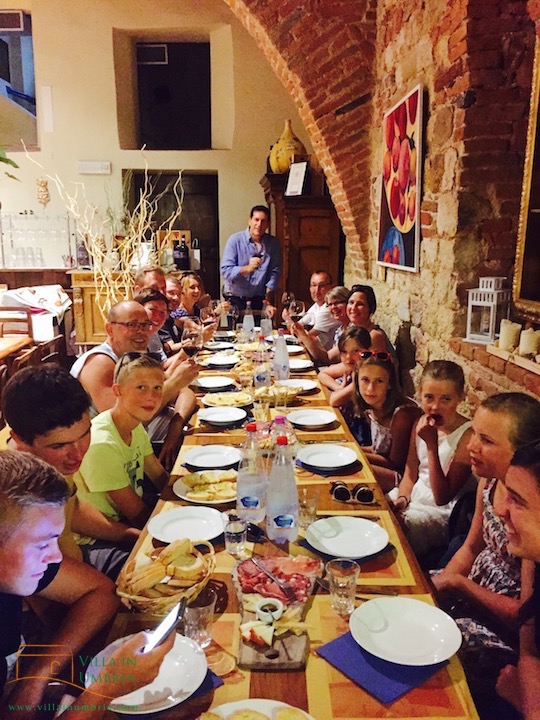 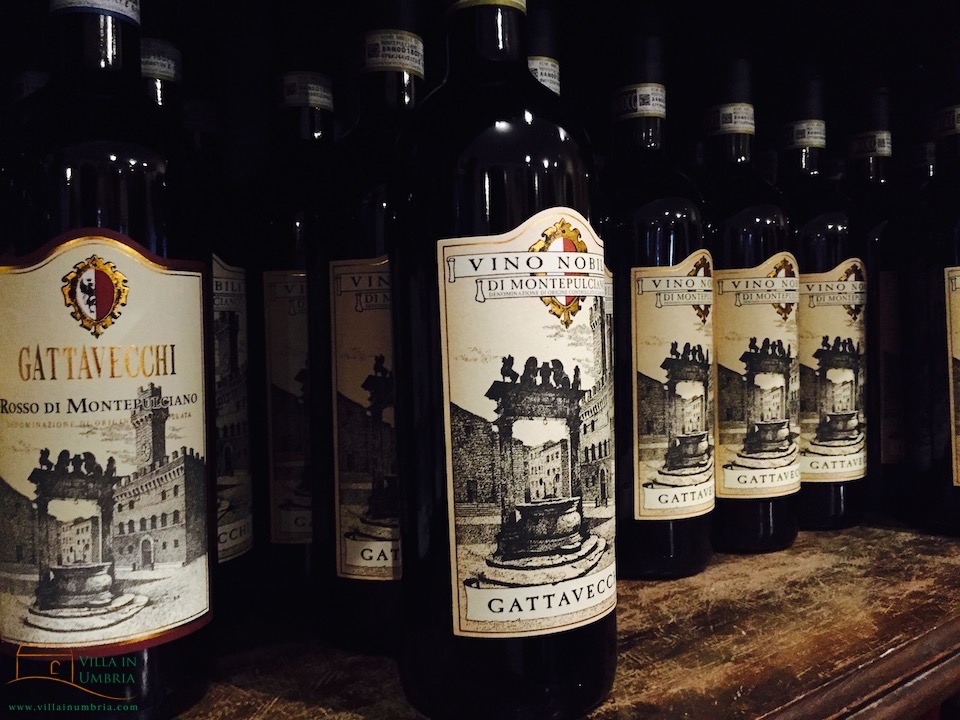 After the wine tasting and with somewhat shaking legs, we took a stroll in Montepulciano and ended the evening at the sagra in Montallese. It was busy and chaotic, but we found two long tables and enjoyed the lovely duck meal with beer, wine and panna cotta! 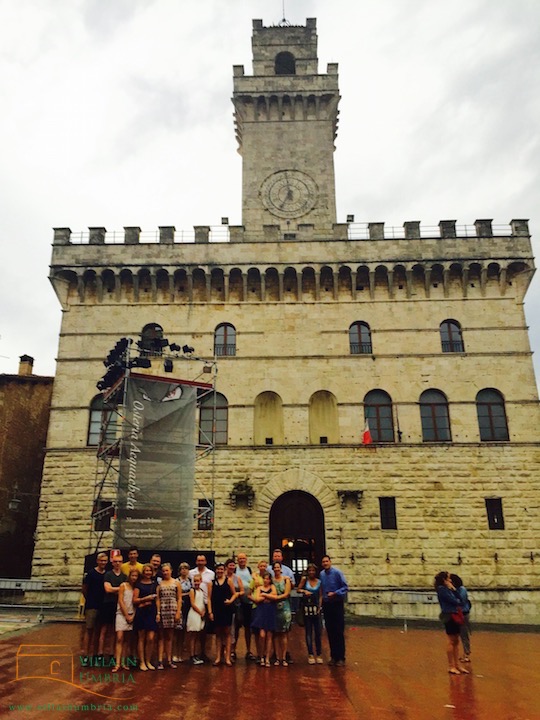 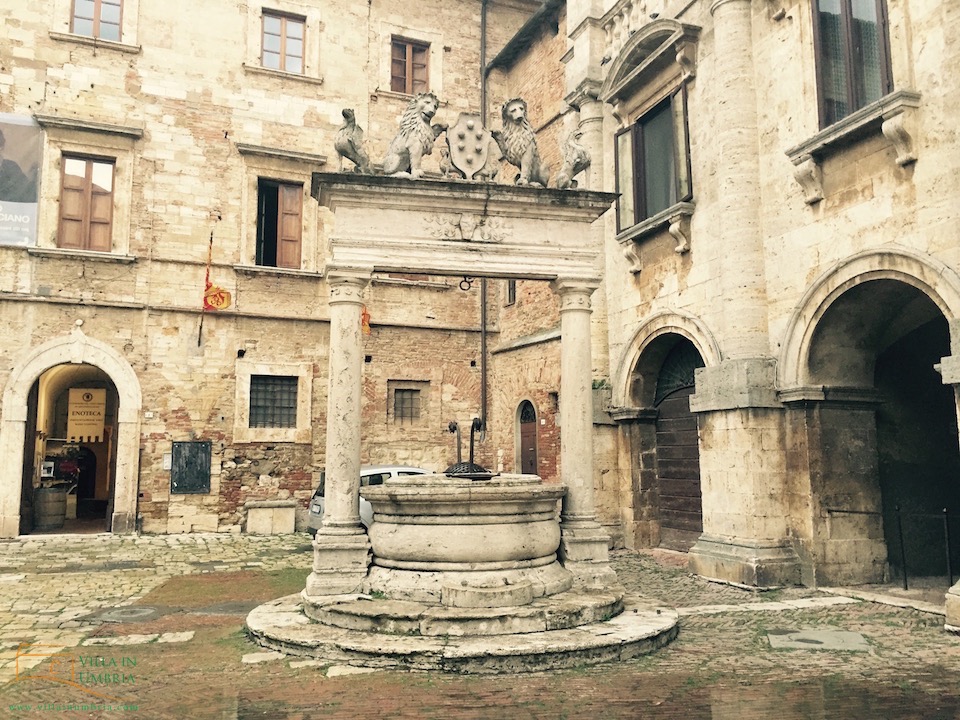 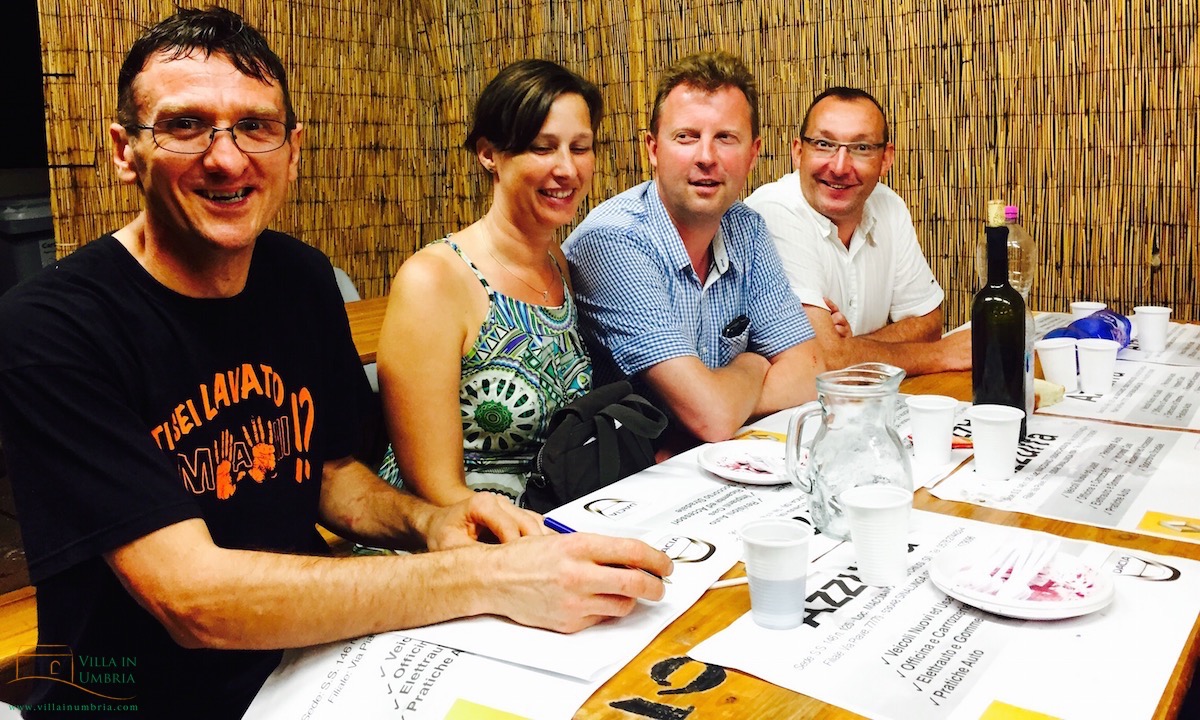 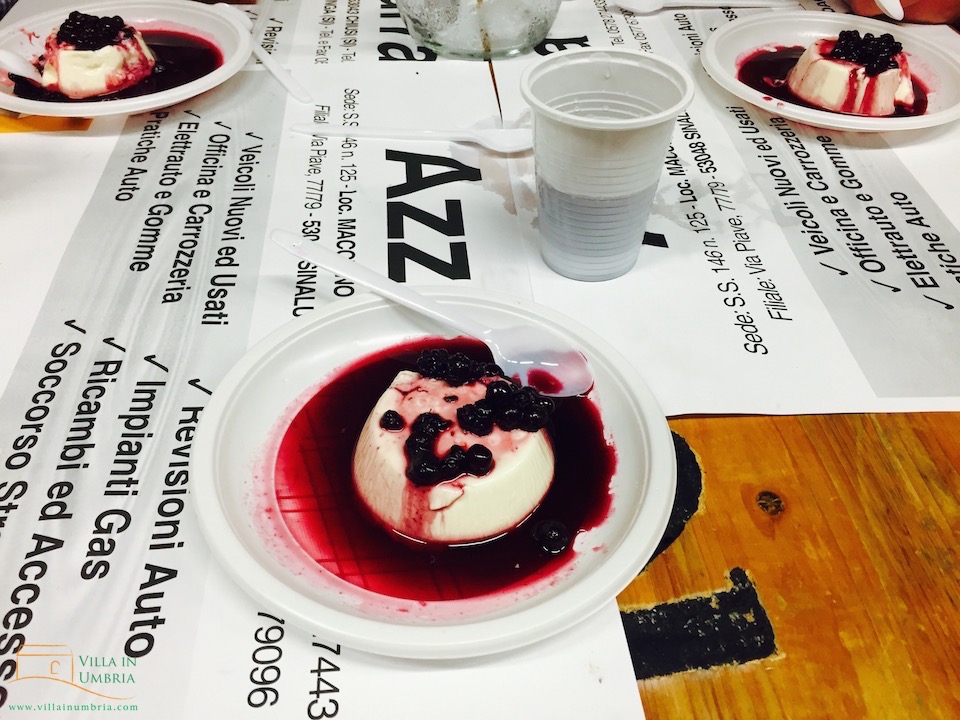 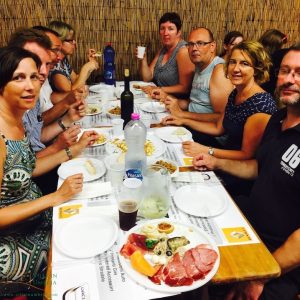 5 responses to “Sagra and wine tasting in Montepulciano”