Show me the way!

Show me the way!

Which way?
Walking is a favorite passtime in Umbria. Mostly it is not one person taking a stroll but whole groups. I wonder wheteher it is the walking or the talking that takes their fancy but they are out and about in large numbers. The commune di Perugia knows about this phenomenon and is doing its bit to make the walks as pleasant as possible, for instance by giving out maps and planting signpost (sometimes ‘the italian way’). The signs below can be found near a nice foot/cyclingpath alongside the Tiber river. As you can make out from the picture, one of the signs can only be seen from the forest but there is no path there………….. 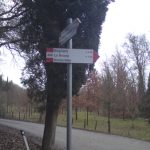 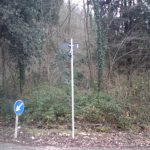 Interested in renting a nice villa and doing some walking or cycling in Umbria? Feel free to contact VillaInUmbria or for a start have a look here.