Spello was founded by the Umbrians and later named Hispellum in Roman times. It was declared ‘Splendidissima Colonia Julia’ by Caesar. The remains of the city walls, which were much wider in the past, attest to the greatness that the city had, as do the archaeological remains that surround it.

The small town boasts the best-preserved city walls of Roman origin in Italy. Within this massive wall are several gates, three of which are of considerable interest. Porta Consolare has three entrances, three funerary statues and a tower topped by an olive tree, a symbol of the best-known local product.

A little over four years ago, the Roman Villa of Mosaics in Spello was inaugurated, an extraordinary museum complex and an architectural work to leave one speechless. There are 500 square metres in which twenty rooms of an ancient Roman villa were brought to light and ten mosaic floors of great beauty, with geometric and figured motifs.

Flower arrangers work an entire night to create carpets and floral paintings winding through the streets of Spello’s historical centre to honour the passage of the Body Christ, carried in procession by the Bishop on Sunday morning.

The result is a route of about 1 mile characterized by the alternation of more than sixty different floral displays.

The Corpus Domini Floral Decorations of Spello are in fact known and loved throughout Italy and even far beyond its borders. Every year they attract between 60 and 100 thousand visitors and tourists, among whom many Instagramers immortalise the marvellous floral spectacle and then share images. 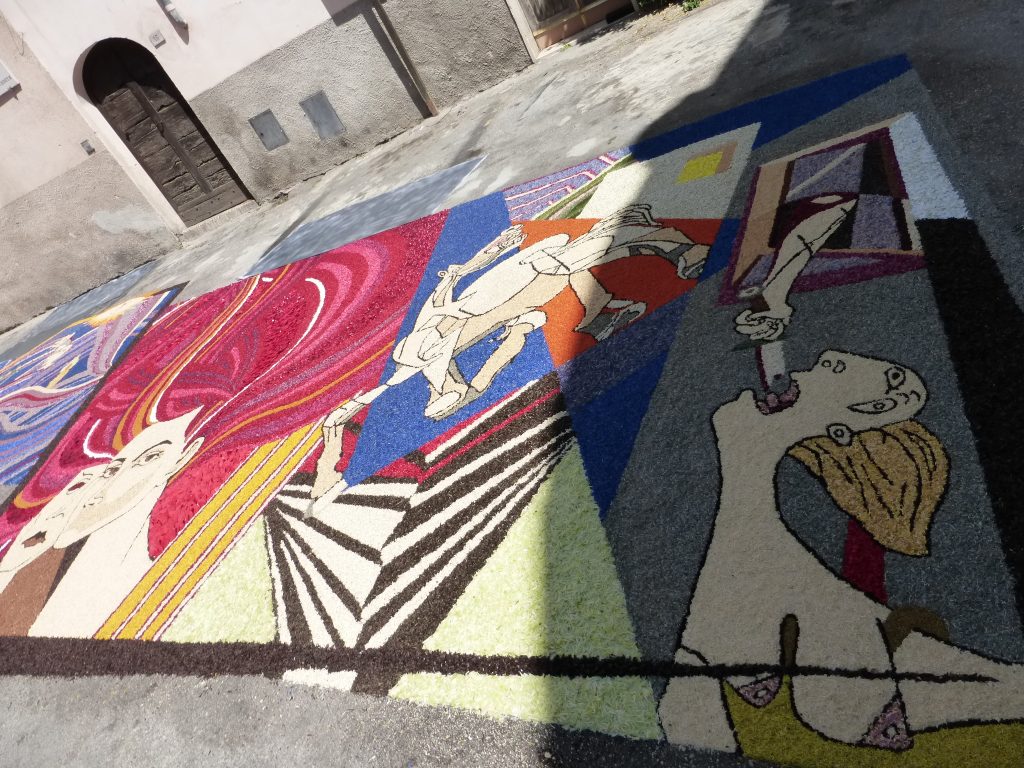 The work behind the Spello flower parade

Among the most important and demanding preliminary stages of the event is the search for the flowers, and the hulling, selection and storage of petals. In each season, flowers and herbs from Mount Subasio and the Umbria-Marches Apennines are collected. The petals are patiently removed and jealously preserved. Of course, the most challenging part of the work of gathering and preparing the flowers occurs in the spring season. In the days preceding Corpus Domini, there is a real general mobilization of large teams of Florists, who disperse along the Subasio slopes, through the fields and plains of the green valleys of Umbria. 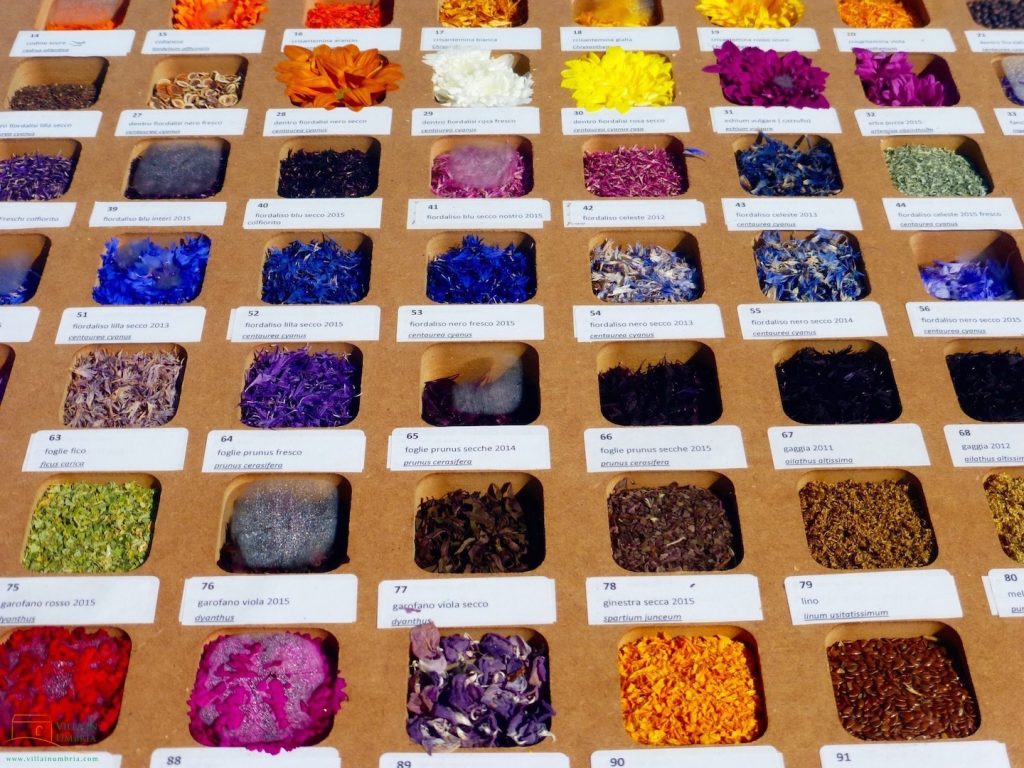 The work lasts the entire night, and only at 9:00 a.m. on Sunday do the streets turn out to be covered with a single multicoloured and fragrant carpet-a unique sight to behold. Suffice it to say that an average of about 70 Infiorate are made in a single floral route, including carpets and large paintings – from 25 to 90 square meters. The uniqueness of the character of the event is certainly given by the technique of execution, which consists of the exclusive use of plant elements not treated with chemical agents nor with artificial or pulverized dyes; in this way, the petal, lying on the road surface, (it cannot be glued) reigns supreme in an enthralling set of colours and scents.

For this edition, the Night of Flowers will coincide with the Romantic Night, an initiative organised by “Borghi più Belli d’Italia” (Italy’s Most Beautiful Villages): couples in love will thus be able to take advantage of the presence of specially designed flower-themed romantic routes and itineraries.

On Sunday morning, after the jury’s assessments for the awarding of the various prizes and prizes provided, the Corpus Domini procession led by the Bishop will, as per tradition, trample on the petal creations.

On the website of Infiorate Spello, you can reserve a parking space.
A pram is not allowed. It usually is extremely busy. 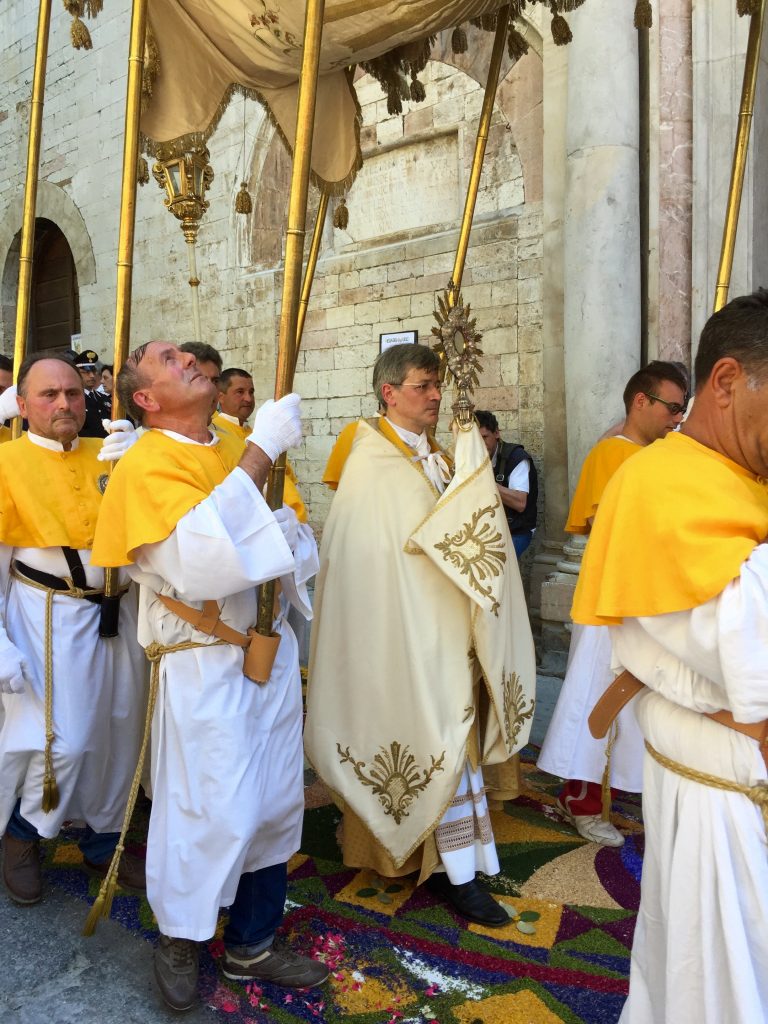 Share
Pin
Tweet
Posted: 12 June 2022/Under: Events, music and arts, Things to do in Umbria/By: Villa in Umbria