As mentioned before it is the time of the year to go hunting for the slender wild asparagus stalks. Well, I say hunting it is more searching with a very big S. You see one of the great talents of the wild asparagus is to hide itself from view. You know the shoots have to be there because you can see the prickly dead weeds of last years plant as well as the equally irritating new leaves, but the shoots itself remain elusive.

Clearly one can train the eye to spot this delicacy.

Take a look at the pictures. This guy, Antonio, one of the many, many Antonios around here, shows what a bit of training (say 50+ years) can do to your foraging skills. Early up in the morning and a few hours later your bags and hands will be pieno zeppo with asparagus.

These pictures were taken in ‘spy mode’  hence antonios’ relaxed composure. Asking what he was going to do with them he answered ‘They use them for pasta, frittata or serve them just boiled in water with a little olio crudo poured over it. ‘They‘ means his wife and daughters. Yes people, at home in regions like Umbria it is still the men who hunt and women who cook. 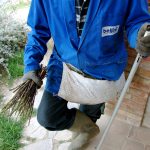 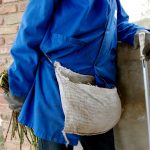 Note the bag, it is made oout of an old local grain sack