A day trip to Siena

A day trip to Siena

There are a lot of wonderful places to visit when you’re on a holiday in Umbria. If you’re staying in Perugia or around the Trasimeno Lake even a visit to Siena in Tuscany is quite easy to organise.

Siena is one of the most wonderful villages in Tuscany with many good restaurants in its historical centre. Planning a visit to Siena can also include a visit to the Abbey of San Galgano. If you haven’t yet seen Siena though, this may be too much in one day. In that case you’d better spent your time visiting the many sites in this medieval city. 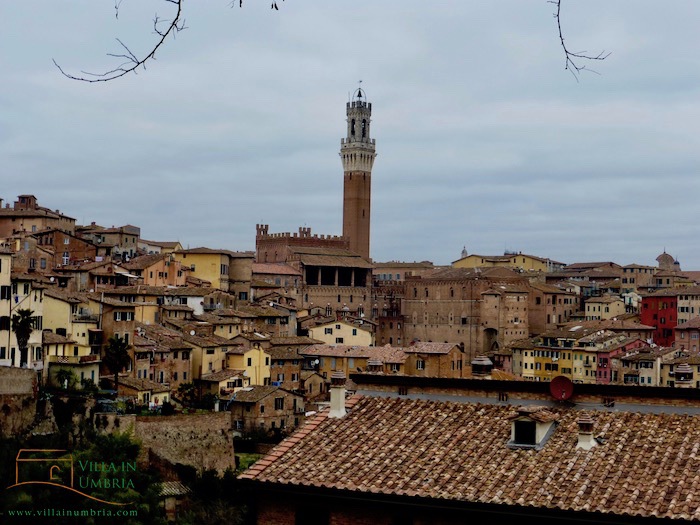 Siena
On a cold winter day we went to Siena for a lunch in Osteria Boccon del Prete together with Saskia Balmaekers from the famous Dutch blog CiaoTutti.nl. A very cosy restaurant where you can eat real Tuscan food. On the day-menu were “paccheri with truffle and funghi” and the traditional antipasti. The wines they serve are of high quality. I personally prefer drinking a glass of Chianti Classico with my pasta, but don’t underestimate the white Vernaccia. Osteria Boccon del Prete is close to the Duomo in the Via S. Pietro. 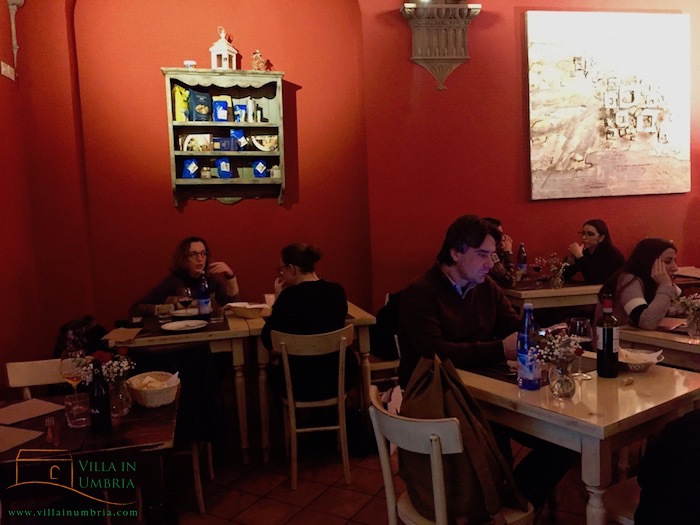 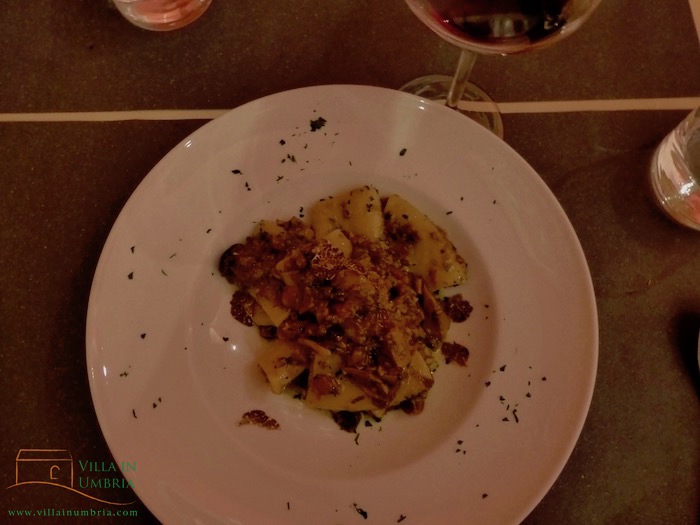 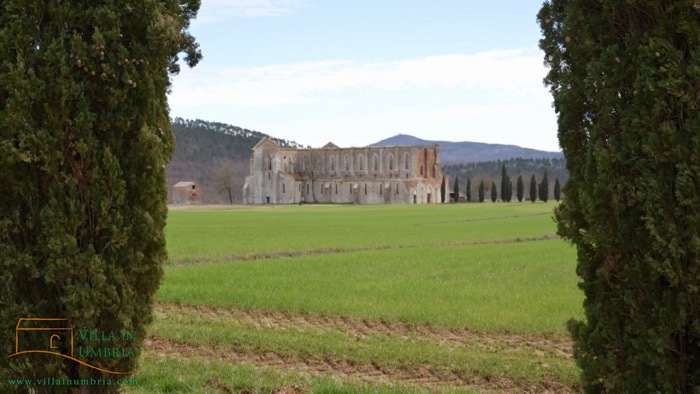 The Abbey was built by Cistercian monks between 1218 and 1288. For many years they led a prosperous life here. Later mercenaries attacked the abbey and its grounds, the plague also hit in this part of Europe and in the 15th Century there were only still 8 monks left who moved to Siena. There were no monks any more in the Abbey. In 1786, lightning struck the bell tower which collapse on to the roof of the Abbey and the church was deconsecrated in 1789.
The Abbey was completely abandoned ever since. 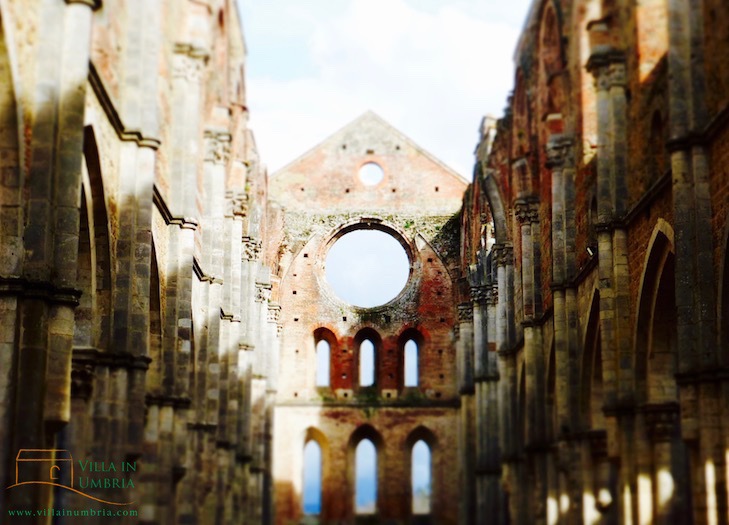 The hermitage of Montesiepi
On a small hill close to the Abbey, a 10 minutes walk, is the Chapel of Montesiepi. This Chapel has been built on the spot where Saint Galgano had retired to live as a hermit. Now the Chapel has a round base and the walls are later frescoed by a Sienese painter. The interior of the Chapel is quite basic but interesting. 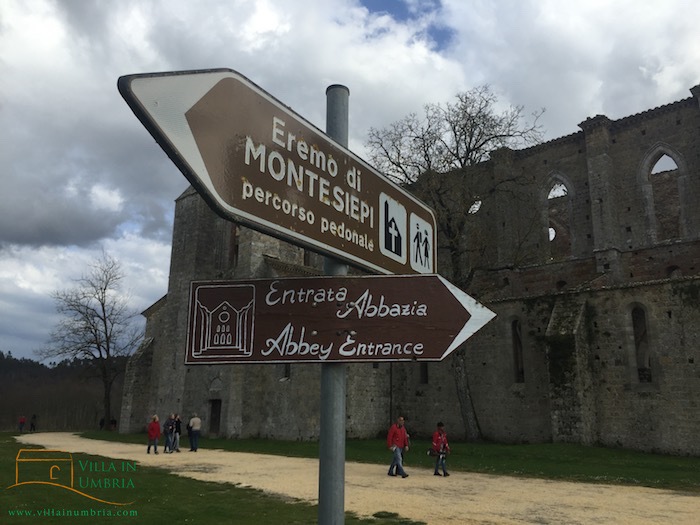 In the hermitage is the sword of Saint Galgano embedded in stone. After a horrible life as a soldier Saint Galgano wanted to dedicate his life to peace and to God. He believed in a new life living in faith. He died in 1181 and with this the legend of Saint Galgano was born. Saint Galgano is a catholic Saint. His sword is still in the stone in the centre of the Chapel. 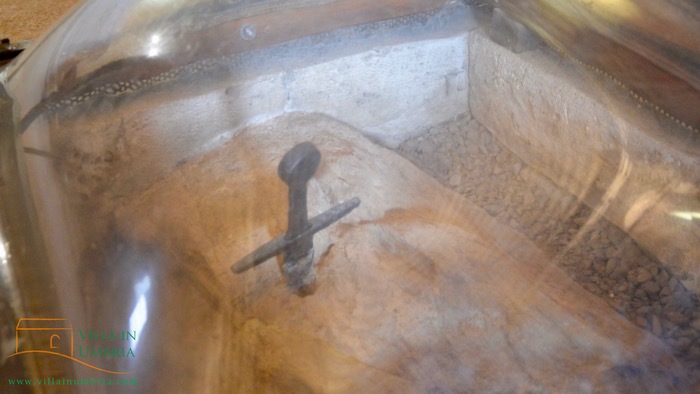 The sword of San Galgano

Saint Galgano is one of the most visited monuments in the Tuscan countryside. The historical Abbey has become a romantic ruin with only the remains of the church. During Summer concerts and events are held in the Abbey.

When you are in the area during your holiday in Italy, a visit to San Galgano is worthwhile. There is also a playground for children. Dogs may not enter the monastery and the church. 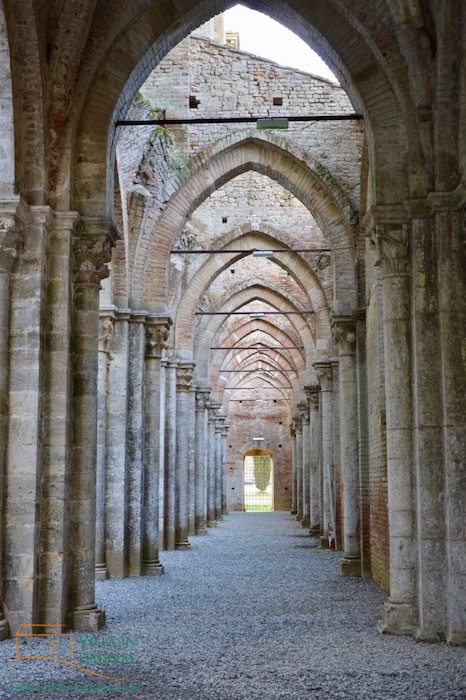 3 responses to “A day trip to Siena”