On a beautiful sunny day in April, I participated in a guided walk in the area of the Abbey of Farneta. Farneta is a small hamlet in the valley next to the Trasimeno lake in Umbria, the Val di Chiana. Coming from the A1 or from Siena, driving towards Lake Trasimeno and Perugia many times I just drove by and never bothered to take the exit for “Abbazia di Farneta”. But now I did … 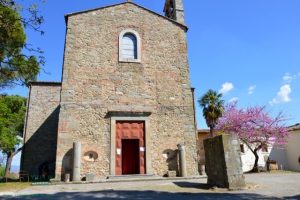 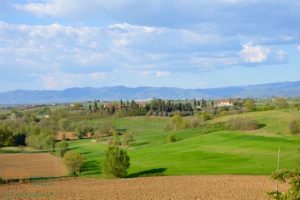 In a landscape of gentle hills, typical of the Val di Chiana, stands an old Romanesk Church. Once it was a Benedictine Abbey of which one can still see some remaining walls. For 65 years, from 1937 to 2002, the church belonging to the abbey has had the same pastor.

Don Sante Felici was a very unique man who not only led his parish with much verve. He was also very interested in ancient times and made sure that the Abbey of Farneta was preserved from downfall.

The Etruscans left many remnants in this area and the pastor made sure that the cellars underneath the church were dug out. And he was right: nowadays one can visit the crypt underneath the altar dating back to pre-roman times. Legend goes that when digging they found enormous amounts of human skeletons and living snakes; an image of Dante’s inferno. 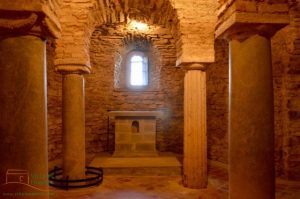 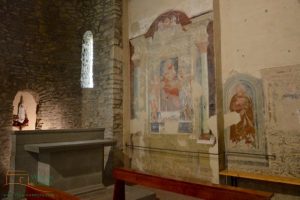 Our walk continued from the Abbey to the former school building of Farneta where to my surprise a small paleontology museum is made with … yes … prehistoric fossils, all found near Farneta! Who would have thought: a million years ago the Val di Chiana valley was a savannah where elephants, hyenas and rhinoceros lived. Even longer ago, the whole environment was a sea. In the museum you can see many fossil shells, but also bones of prehistoric elephants, fossilised feces of hyenas and more.

Don Sante made arrangements with the workmen: they had to warn him if they found bones or other valuable relics. In this way, even two whole skeletons of prehistoric elephants were found, which are now in the paleontological museum of Florence. To this day farmers in the area or workmen during new construction projects find prehistoric bones or Etruscan remains.

It is thanks to the erudite priest Don Sante that many relics found around Farneta can be seen today. His heritage is now managed by a voluntary organisation. 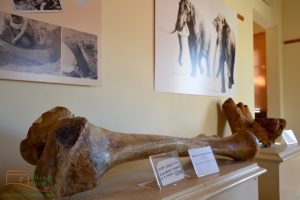 If you would like more information about the Etruscans and the history around the Val di Chiana, then let yourself be guided by Laura. She has an incredible knowledge and is a passionate story teller. I already experienced this at a guided tour about Etruscans at the Maec museum of Cortona. She is an inexhaustible source of information. You can call her on + 39 3494949604, or email info@cortonatouristguide.com. She speaks English. 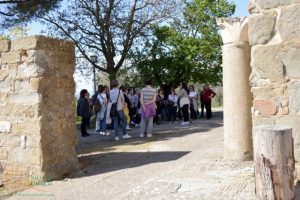